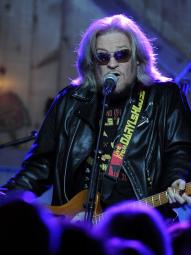 For more than 90 minutes Friday night, former Dutchess County resident Daryl Hall and his longtime band mate John Oates – known around the globe as Hall and Oates – sent about 300 people packed into the former Towne Crier on Route 22 in Pawling into a foaming frenzy.

Hall and Oates played hit after hit after hit, but while the iconic guitar licks and Hall's signature soulful singing voice anchored every tune, there was a sense of musical discovery, an aura of revelation, a feeling that both the band and the audience were experiencing these timeless songs for the first time ever.

The occasion was the opening of Daryl's House, a restaurant and music venue run by Hall.

Daryl's House will feature performances by well-known musicians, including many who have appeared on "Live From Daryl's House," the Internet and cable television music program Hall has hosted since 2007. And the menu at Daryl's House features food selected by Hall.

Hall sold his home in Millerton last year and now lives in nearby Sherman, Connecticut. Hall remodeled the old Towne Crier, which he is leasing, to look like his former home in Millerton, where "Live from Daryl's House" had been filmed. Episodes of "Live From Daryl's House" will continue to be filmed in Pawling without an audience, with six episodes planned for a March 2015 rollout on the Palladia cable television network.

Changes Hall has made to the building include opening up the bar to the main room and adding a dining room off to the left of the room with the stage. Anyone who has ever been to the old Towne Crier will feel familiar in the room; Hall's modifications fuse the Wild West with the frontier-like atmosphere that is a critical part of eastern Dutchess County's personality.

Gone is the Southwestern motif of the Towne Crier. Daryl's House evokes a rustic barn, a watering hole where you could hitch your horse outside and saunter into the saloon for a shot of whiskey.

"There is something about this," Hall told the Journal shortly after the performance concluded. "The whole thing is so surreal to me. I travel all over the world and I'm on the road and I have my routines. It's a sort of structured situation for the obvious reasons. But to do it in my own backyard is really weird, man. I ate my own food tonight – my own recipes. I saw a lot of old friends. It was great."

The low ceiling, throbbing crowd and celebratory tone of the evening Friday night could have made you feel like you had just dropped in on two of your close friends, to watch their new band – their very good new band - perform in the basement of a neighborhood home.

The intimacy of Daryl's House allowed everyone in the joint to see just how much satisfaction Hall gets out of strumming an electric guitar in that rock-star style, with an emphasis on the down beat. The sound was crisp, the give-and-take between performer and audience a conversation rather than a lecture. Somehow, Hall has taken the spectacular adrenaline unleashed in an arena rock concert and bottled it up at Daryl's House, only to let the genie out at show time in a cataclysmic downpour of nostalgia, nuance and relevance.

Hall and Oates opened up the show with "Maneater" and they kept serving up the hits. "Adult Education," "She's Gone" and "Say It Isn't So" were spectacular. "She's Gone" would have prompted cheers from Gladys Knight and the Pips. "One on One" would have made Barry White and Marvin Gaye blush.

And the extended jam on "I Can't Go for That" showed that, in addition to maintaining a deep catalog of hit songs, Hall, Oates and the six-piece band that backed them up are rarely satisfied and constantly pushing the envelope, reinventing the familiar, leaving no stone unturned.

The songs played by Hall and Oates in Pawling Friday night were so refined, so groovy, so gritty, so polished and maintained such class that you could almost imagine Frank Sinatra or Dean Martin strutting out on stage, dressed in a tuxedo, bowtie undone and danging from the collar, a glass of scotch in their left hand, going up to Hall or Oates, putting their arm around them and saying, into the microphone, "Not bad, kid."

The punch that Hall and Oates delivered with each tune, the broad smiles each maintained for nearly two hours and the sense of achievement, for both rock star and audience member, carried the glow of that song the New Year's Eve house band launches into after finishing a version of Auld Lang Syne begun at the stroke of midnight. Everyone's happy. Everyone's dancing. Everyone's on the same side of the line in the sand.