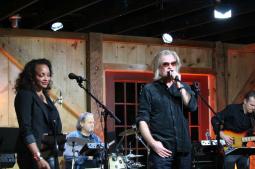 For those of us in the Connecticut and New York area, the closing of The Towne Crier a few years ago was a sad day for the local music scene. We thought the old place would probably be torn down. Enter Daryl Hall and his love of renovating old buildings and Viola! the old shindigs have been transformed into contemporary music venue and restaurant. To his credit, Mr. Hall has kept the country atmosphere with lots of wood and wide floor boards but has introduced technology that catapults the old place into the here and now. Crystal clear screens are placed strategically and episodes of Daryl's House get you right in the mood. This was our first time at the new location and Kasim Solton was the entertainment. I'll come back to his exceptional performance in a moment. Our reservations were at 8PM which is the best time to get there, have dinner and then enjoy the show. Just to get us in the mood, we all started with The Daryl's House Manhattan (because why not?) made with Berkshire bourbon and a cherry on top. We skipped appetizers and glad we did, the entrees are plentiful. My husband David, choose the Hamburger Your Way, he's a burger afficiando. He said it was "marvelous!" And most importantly the bun was the right size. Our friend Dawn enjoyed the Philly Cheese Steak with Provolone (hey Daryl's from PA) and said the French Fries were done to a turn. Gary had the steak finding it tasty but just a tad too rare despite asking for medium. I've saved the best for last - me! Amanda's Bouillabaisse was the best I've had, and I've eaten bouillabaisse in France. It was perfectly cooked and hot, this is a major thing for me, it must be hot. The fish seemed like it just came out of the sea. Terrific. We all passed on dessert.

Now the entertainment. While you're eating, the flat screens show past web shows from Daryl's House that make you wish you had some modicum of musical talent and put you in the mood. Kasim Sulton entertained us on December 13th. He's an American bass guitarist and and keyboardist having played with or backed up or opened for Todd Rundgren, Utopia, Blue Oyster Cult, Meat Loaf, and of course Hall and Oates. He's a seasoned performer who knows how to work the crowd and delivered an awesome show, witnessed by those dancing with the security guard on the way to the parking lot.

If you live in the area, or even if you don't (some people came from 100 miles away), this is THE local place for local music. It's comfortable, the staff is wonderful and accommodating and you will ROCK!

Read the full story on TripAdvisor