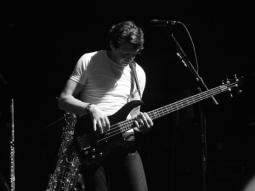 The timeless and enduring album "Bat Out of Hell" by Meat Loaf has sold 14 million copies, according to the Recording Industry Association of America.

That's a big number. And it's a reminder of the Hudson Valley's colossal arts legacy.

"Bat Out of Hell" was recorded in Woodstock and features former Ulster County resident Kasim Sulton, a bass player, guitarist and vocalist known for performing with some pretty big names in the music industry, Mick Jagger and Hall and Oates among them. Sulton has also performed extensively with former Woodstock resident Todd Rundgren.

In something of a Hudson Valley homecoming, Sulton on Saturday will perform at Daryl's House, a music venue and restaurant in Pawling that Daryl Hall of Hall and Oates opened in October. Sulton, who has a new CD called "Three," will perform with guitarist Matt Beck, who has performed with Rob Thomas and Rod Stewart.

"Just the simple fact that I was asked to play it," Sulton said of Daryl's House, "that just makes me so proud and happy."

Sulton, who has performed at The Chance and the Mid-Hudson Civic Center, both in Poughkeepsie, will on Saturday in Pawling take his colossal experience of making music at the highest levels of the recording industry and deliver it within a context of intimacy.

"Imagine if you were in your living room and you were settling in for an evening of popcorn or chips and dip and you had your closest friends next to you, or your family, and you were going to watch a movie or a concert on television or your favorite show," Sulton said. "That relaxed atmosphere, that you would expect in your own home, that's what I really strive for, is to make people feel that comfortable."

Sulton during a recent telephone interview with the Journal spoke very fondly of his time in the Hudson Valley. Sulton recalled rehearsing at the Bardavon 1869 Opera House as a member of Rundgren's band, Utopia. Woodstock during the 1970s, he said, "was a very, very interesting place. And Sulton, who grew up on Staten Island and remains a resident there, enjoyed playing The Chance with Utopia.

Read the full story at the Poughkeepsie Journal