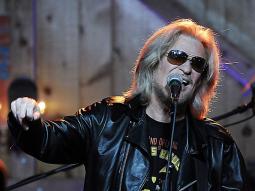 PAWLING – Hoisted in the air by waiters and waitresses, plates of food drift by with an aroma so tantalizing, so tempting, you might consider putting down your drink and following along, grabbing a chair and sitting down at a table full of strangers before saying, "Do you mind if I just have a taste?"

But it's hard to move through the crowd at Daryl's House on Route 22, the music venue and restaurant owned by Daryl Hall, one half of the legendary rock band Hall and Oates and a member of the Rock and Roll Hall of Fame who has helped trigger the sales of millions of records. The place is packed. People seem stitched together.

It's Saturday night and John Penny of Poughquag has made his second visit to Daryl's House.

"The atmosphere," Penny said, "brought me back."

Two weeks after opening with a colossal Halloween performance by Hall and Oates, who performed hit song after hit song, Daryl's House on Saturday maintained its buzz, its charge and its draw.

And the closest anyone in the building got to Hall on Saturday was watching "Live From Daryl's House," the Internet and cable television music program he has hosted since 2007, on a large screen in the bar. The entertainment was provided by the band Mad Satta, which features as lead singer Joanna Teters, who grew up in New Paltz and now lives in Brooklyn.

"It was a great experience," Teters said. "It's a really classy joint."

These two evenings at Daryl's House — the restaurant is open Wednesday-Sunday — bode well for the future of Hall's latest entrepreneurial undertaking. The success of Daryl's House also holds promise for yet another chapter in the Hudson Valley's historic cultural legacy and the manner in which the arts can leave an impact on the economy by spurring spending and generating tourism.

According to a recent study by the Center for Research, Regional Education and Outreach at the State University of New York at New Paltz, the arts across Dutchess, Orange, Putnam, Rockland, Sullivan, Ulster and Westchester counties generate nearly a half-billion dollars in economic activity and are linked to 4,970 jobs. According to the study, Dutchess County's cultural sector has an economic impact of $28.5 million and has created 1,015 jobs.

"You couldn't ask for anything better," Peter Cris, president of the Pawling Chamber of Commerce, said of Hall opening Daryl's House.

Cris said Daryl's House and Pawling could benefit greatly from the proximity to western Connecticut, where Hall lives, as well as Putnam and Westchester counties.

Underscoring the inroads that Daryl's House has already made on the tourism front are the origins of club-goers. Opening night at Daryl's House attracted fans from California and Arizona, among other places. On Saturday, about a dozen club patrons said they lived outside of Dutchess County.

"The anticipation is there," Cris said, "that this is going to be great for Pawling."

Read the full story with videos at the Poughkeepsie Journal