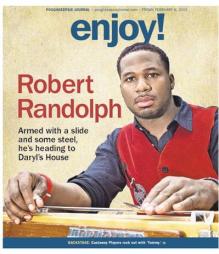 He gets people standing up when he sits down.

He uses rock and soul music to pay reverence to his roots in the church.

And pedal steel guitar player Robert Randolph loves the Hudson Valley, where he has performed often.

“I call them the great mountain music fans,” Randolph, who is from northern New Jersey, said of the audiences he has played for in Poughkeepsie, Hyde Park, Kingston, Woodstock and at Hunter Mountain in the Catskills. “Music fans up that way — you know you’re getting real New Yorkers.”

With a gospel tinge, Randolph has carved out a niche for himself with the pedal steel guitar — which you sit down to play — among jamband, rock and festival fans. He has collaborated with Eric Clapton and Carlos Santana, delivering a signature sound that evolved out of his religious upbringing and neighborhood church services.

And on Saturday Robert Randolph and the Family Band will perform at Daryl’s House in Pawling, a restaurant and music venue owned by former Dutchess County resident Daryl Hall, one-half of the rock duo Hall and Oates and a member of the Rock and Roll Hall of Fame.

Randolph is a big fan of the music made by Hall and Oates.

“The thing that makes it so cool is, it really has the elements of everything — it’s soulful, it’s rock ’n’ roll, the ballads are great,” he said. “It’s really awesome, man. There are just so many cool things.”

Randolph and his band opened for Hall and Oates last summer. “They played ‘She’s Gone’ and ‘Abandoned Lunchonette,’” Randolph said. “Just to hear those guys — to see them and meet them — it was cool.”

Randolph’s electrifying sets showcase the Sacred Steel style of music — which is built around the steel guitar, which evolved into the pedal steel guitar — that he has single-handedly propelled from neighborhood church services to radio station airwaves and music festivals nationwide. Randolph has also revolutionized the use of the slide, a small cylinder held in the hand and used to manipulate the strings and sound of the pedal steel guitar.

According to www.pbs.org, Randolph’s music “has its roots in an African-American gospel tradition that developed in a group of Pentecostal churches in the 1930s. Lap steel and pedal steel guitars were embraced in worship in place of an organ.”

And Randolph said a new record he plans to release later this year will “reclaim” his roots, which he described as a combination of many styles.

"It’s a mixture of old Robert Johnson meets Sister Rosetta Tharpe meets the lap steel,” he said. “That’s what we grew up playing.” Randolph’s signature sound has left a big impression on the Hudson Valley.

“It’s just some of the best slide stuff I’ve heard — probably since Duane Allman,” said Doug Lucy of Fishkill. “It’s pretty unique. They start out and all of a sudden they’re rocking like crazy. They start off slow and before you know it, they’re rocking. He can do mellow and he can do hard. That’s what I like.”

Ulster County guitarist Murali Coryell has opened up for Randolph on multiple occasions, including when Randolph and his band performed at the old West Strand Grill in Kingston. Coryell credited Randolph with developing a sound that is immediately identifiable.

“There is a deep gospel sound,” Coryell said. “Its deep church stuff.”

Read the full story at the Poughkeepsie Journal